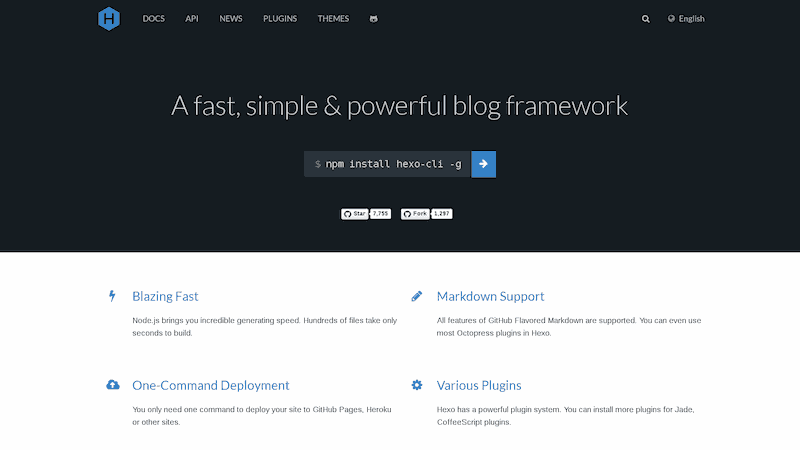 For a while now I've been running a custom hybrid of Ghost and the static site generator I built early last year. While it was doing the job, it was a bit ugly on the backend and difficult to maintain so as a Christmas project I went looking for a replacement.

After some cursory googling I found Hexo, which seems to satisfy all my fairly simple requirements:

Functionally Hexo is pretty similar to Jekyll and uses all the same terminology.

The directory layout is split between source for content and themes for layout. The latter can deal with CSS and Javascript preprocessing automatically, which I was initially cold on (small modules, yo!), but it grew on my when I realised the "hexo server" site preview tool was automatically recompiling CSS & JS as I was making changes.

It's fairly pluggable, and supports my favourite Markdown renderer Marked which does lovely things to Markdown.

One of the things I'm a particular fan of with Hexo is the ability the put data (as either YAML or JSON) into the front-matter. This is awesome because it lets you make templates to do pretty much anything.

One example is my Projects page, which now consists of a paragraph of actual text, and a big glop of JSON representing each project. The template takes the JSON and renders the page as if by magic, and it's much nicer than trying to organise that stuff manually.

Pretty happy with this one. I've been wanting to standardise on something decent, and this fits the bill nicely. There's a whole bunch of tools and the workflow is nice. The documentation is excellent and the process of getting from nothing to a functioning site is pretty straightforward.

I like it. If you're looking for a static site generator in the Node ecosystem, then definitely give this one a go.